Sports monsters in European football were particularly aggressive this past week in crypto engagement, while analytics firms like Deloitte and Nielsen predict growth for the years ahead in crypto and blockchain sports sponsorship spend. FC Barcelona and Manchester City led the charge in sports headlines around crypto this week, but for two entirely different reasons.

Let’s take a look at this past week’s biggest stories.

We’ve seen FC Barcelona mentioned quite a bit in crypto and blockchain headlines over the years – the club was an early mover on fan tokens and more recently, has entertained offers from the likes of Polkadot and Binance around it’s once open jersey sponsorship.

The news this week, however, was far from a partnership, and in fact was an elaboration from club president Joan Laporta that rather than partnering with a crypto-endemic platform or project, FC Barcelona will instead choose to create their own NFTs, their own metaverse, and seemingly – their own cryptocurrency.

English Premier League behemoth Manchester City has had it’s fair share of ups and downs in crypto and blockchain territories. However, it hasn’t slowed the club from staying engaged, and this past week Man City signed a new deal with cryptocurrency exchange OKX, securing the exchange as the club’s official cryptocurrency partner, with involvement across the men’s and women’s clubs, and the team’s esports division – as well as arena assets at Etihad Stadium.

Headlines were booming last year when NBA Top Shot sold record-shattering NFTs of LeBron James that went for $210,000 – and then $230,000 – the most ever spent on a sports card NFT. That record can be thrown to the wayside this past week as a Mickey Mantle NFT found it’s final bidder on Friday, who shelled out a cool 175 ETH, or around ~$470,000. The NFT, part of Topps “Timeless Series,” was a 1952 Mickey Mantle card that includes interviews with Mantle’s two sons.

Related Reading | NFTs In A Nutshell: A Weekly Review 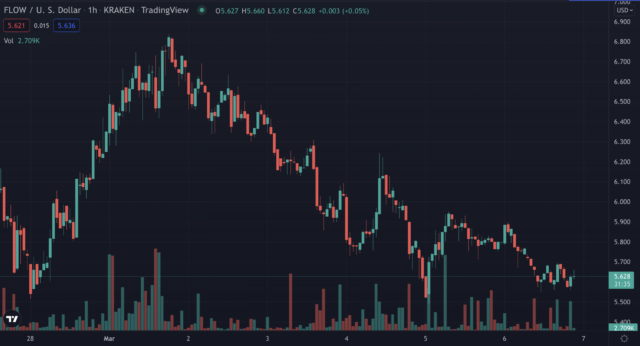 Duke basketball coach Mike Krzyzewski is a ‘face of college basketball,’ and certainly a Duke icon. Despite having a two day open window, it took less than two hours for NFT platform OneOf to sell over 1,000 NFTs representing Duke basketball tickets in commemoration of Coach K’s final game. Despite a loss to rival North Carolina, the NFT drop is seemingly a win for all parties – most notably OneOf, as this was the platform’s first collegiate basketball play.

Nielsen Report: Blockchain Sports Sponsorship To Hit $5B By 2026

A new brief from media data and analytics firm Nielsen is predicting blockchain and crypto sports sponsorship spend to cross $5B – a nearly 8X from last year’s spend – by 2026. Nielsen sees a number of evolving factors, from consumer interests and engagement, to emerging media platforms and growing legitimate players in crypto, to all contribute towards this growth. Crypto and blockchain firms had far and away the largest percentage of growth in sports sponsorship spend last year relative to the year prior.

Next Up On Play-To-Earn… Sports Games?

Video game titles like FIFA have often been cited as prime contenders for things like NFT integration. Now, sports video games at large are part of the discussion for play-to-earn. In a detailed report from Sportico this past week, Turner Sports is building out a new play-to-earn title called ‘Blocklete Golf.’ Check out this excerpt from Sportico that details what it’s all about:

Users can buy a unique NFT golfer with built-in power, accuracy, focus and stamina stats, starting at $7. Golfers with better stats, meanwhile, can sell for hundreds of dollars. The golfers will compete in events for prizes that can be used to improve their characters, making them more valuable in the marketplace. Blocklete plans to introduce cash contests and NFT gear to the system as well.

Turner also had a hand in NBA Top Shot, and Blocklete Golf has been in the works since 2019. Blocklete recently shifted to Top Shot’s native Flow blockchain recently as well (both products led by development team Dapper Labs).