The cryptocurrency market went through some massive volatility throughout the past week. This was largely induced by President Joe Biden’s executive order on digital assets, US inflation numbers coming up, and the ongoing war between Russia and Ukraine. Let’s unpack.

Bitcoin’s price was trading at around $41,000 this time last week but quickly headed south and dropped towards $39K on Saturday. What followed was a few days of choppy sideways action, and BTC even declined to $37,300 on Monday. On Wednesday, there was a leak of the Executive Order that the US President Joe Biden was to sign, and it was perceived very well by the market.

BTC skyrocketed above $42K in hours as the order itself was more positive than expected, especially amid the ongoing geopolitical tension. However, on the following day, the cryptocurrency crashed to where it was before the pump, printing a classic Bart chart and erasing all gains. During that day, the CPI numbers came out at 7.9% – the highest in decades. The CPI is an index that’s used to gauge inflation, though many believe the actual numbers to be much higher. This caused another storm of volatility where the price went up and then decreased by about $1.3K.

Today, the market was also quite tumultuous as reports came out that Russian President Vladimir Putin said there was progress in the talks with Ukraine. This was once again short-lived as the markets retraced.

All in all, there was no shortage of volatility which also led to a lot of leveraged positions being liquidated. It’s important to remain vigilant as broader market uncertainty continues to loom. 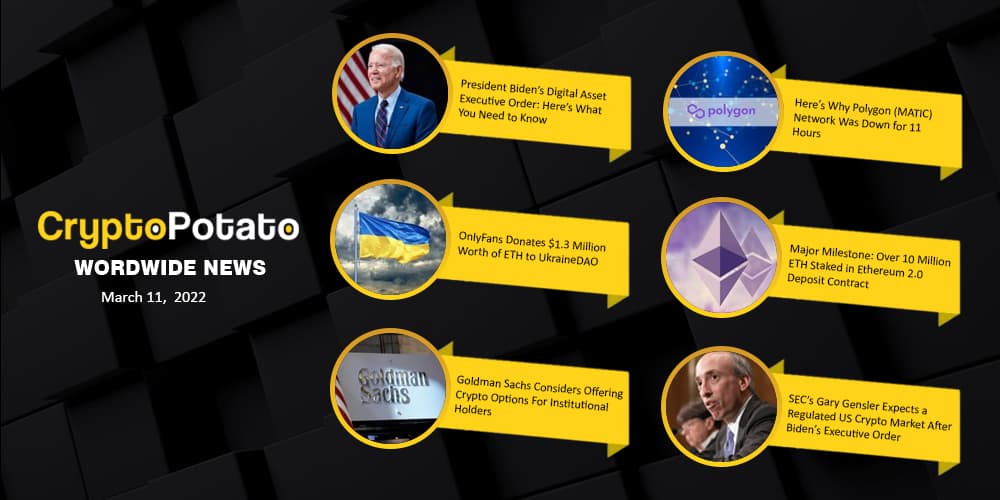 President Biden’s Digital Asset Executive Order: Here’s What You Need to Know. The White House released a statement of the executive order that President Joe Biden is to sign on digital assets. The document outlined a few key areas where national regulators should work to drive further legislative clarity in the industry.

Here’s Why Polygon (MATIC) Network Was Down for 11 Hours. Polygon’s network was not operational for about 11 hours starting March 10th. The reason for this was a planned upgrade. The team released a temporary hotfix, although a longer-term solution is still in the works.

OnlyFans Donates $1.3 Million Worth of ETH to UkraineDAO. The popular video subscription platform OnlyFans donated 500 ETH to a decentralized autonomous organization in support of Ukraine. At the time of this writing, the cryptocurrency is worth around $1.3 million in total.

Major Milestone: Over 10 Million ETH Staked in Ethereum 2.0 Deposit Contract. Ethereum 2.0’s depositor contract now contains over 10 million ETH – a major milestone for the network. This is currently worth somewhere around $26 billion, and it leads up to the chain’s full upgrade.

Goldman Sachs Considers Offering Crypto Options For Institutional Holders. The multinational investment bank – Goldman Sachs – is supposedly exploring the provision of bilateral cryptocurrency options for some of its clients. This will deepen its involvement with crypto-related derivative trading options for institutions.

SEC’s Gary Gensler Expects a Regulated US Crypto Market After Biden’s Executive Order. The current Chairman of the United States Securities and Exchange Commission – Gary Gensler – said that the agency will be collaborating with other government organizations to deliver “important public policy goals” in the field of cryptocurrencies, following the President’s executive order.